Maaseik, Belgium, January 31, 2012. A total of 3'000 fans were in attendance tonight at “Lotto Dôme” as the home side of Noliko MAASEIK embarked on a mission impossible to stop the triumphal march of Italy’s TRENTINO PlanetWin365 in the Playoffs 12 of the 2012 CEV Volleyball Champions League. 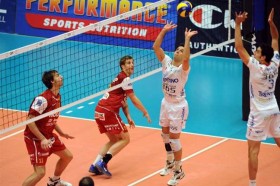 Triple champions of TRENTINO down Noliko in straight sets

What was initially described as a kind of battle of David versus Goliath turned into reality as the triple European and World champions scored an easy 3:0 away win (25-18, 25-22, and 25-18).

Even though TRENTINO was missing middle blocker Mitar Djuric who got injured before the match, the Italians were not that impressed by the atmosphere created by the local fans and they rapidly imposed their rhythm (25-18).

Noliko took the initiative in the second set (5:4) but TRENTINO got quickly back on track moving up 12:7 and 16:9.

Noliko fought back to -4 (15:19) with the head coach of the visiting team, Radostin Stoytchev, being forced to call a time-out.

The home side made it to -1 (21:22) but this was the end of their fabulous comeback as TRENTINO finished it off only a few rallies later.

The guests started strong in set 3 and showed their quality and superiority leaving no chance to the home side and wrapping it up at 25-18 for the final 3:0.

“We know that once we take the lead, it is very difficult for any opponent to come back into the match. However, tonight, supported by their fans, the players of Noliko succeeded in doing this, and so we are very happy with this win in straight sets” says TRENTINO Matteo Burgsthaler.

“We always started trailing in the score, in each of the sets, and TRENTINO is such a strong side that they do not let you come back anymore” stresses home setter Yannick van Harskamp.