Friedrichshafen, Germany, February 1, 2012. That was a memorable night for Germany’s VfB FRIEDRICHSHAFEN as the German champions demolished TOURS VB in straight sets (29-27, 25-18, and 25-21) for the first round of action in the Playoffs 12 of the 2012 CEV Volleyball Champions League. The team of head coach Stelian Moculescu needs only one more victory next week in France to fulfill its dream of making it to the Playoffs 6. 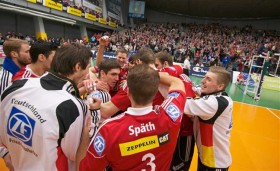 In front of 3’100 spectators the teams delivered a first set which symbolized the high level of action normally associated to the CEV Volleyball Champions League.

VfB FRIEDRICHSHAFEN initially dominated the scene and went up 14:9.

Via the impressive service of Cuban Yosleyder Cala TOURS VB found its way back into the match and drew level at 14 all.

After that the teams battled mightily for every single point.

Finally the hosts silvered their third opportunity to go for the 3:0 with an ace of Milos Vemic.

VfB FRIEDRICHSHAFEN did not lose composure anymore while TOURS VB could not keep the level of the previous set.

“That was the best match of his career”, said Moculescu.

“He used many different options and mastered very well all of his attackers”.

Of course the German coach was quite satisfied also with the performance of the team: “The result was unexpected, but deserved”.

Mauricio Paes, head coach of TOURS VB, sent his compliments to the opponent.

“VfB FRIEDRICHSHAFEN played very well in service and attack. That was the difference today”, he said and added: “We could not put up any resistance”.

To catch a spot for the Playoffs 6 VfB FRIEDRICHSHAFEN now needs one more victory next Wednesday in Tours.

If TOURS VB wins the away match of the Playoffs 12 the so-called golden set will decide the final outcome of this clash.

“It will be the same situation that we experienced today”, said Juraj Zatko.

“But there the audience will support TOURS VB and not us. It will be difficult, but we have a good chance to win”.