Kedzierzyn-Kozle, Poland, February 1, 2012. Although the team is currently plagued and sidelined by a flurry of injuries, Zaksa KEDZIERZYN-KOZLE played with glowing hearts tonight for the opening round of the Playoffs 12 in Europe’s most elitist league but finally the guests of Arkas IZMIR could pocket a 3:1 away win (27-25, 23-25, 25-16, 25-23). 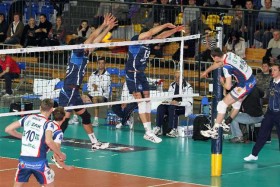 With most of their stars already out of contention, the home guys were additionally hampered by the injury that affected setter Pawel Zagumny during the warm-up.

Zaksa started with only one real middle blocker, Kazmierczak, who was joined by Dominik Witczak, who normally plays opposite.

With the contribution of Liberman Agamez and Burutay Subasi, Arkas opened strong (8:5) before Witczak and Guillaume Samica turned the odds around for the hosts who were up in the score by the second mandatory stop (16:14).

Some great serving of Subasi fired up the comeback of Arkas (from 19:15 down to 20 all) before Zaksa missed out on two set balls and IZMIR closed it at 27-25.

Zaksa played with good consistency in defense in set 2 and finalized many attacks with Michal Ruciak calling for the provisional 10:6.

However, Arkas did not slow down the pace and went up 16:14 via Subasi and Brazilian Joao Pereira Bravo; Zaksa sped up again (20:17) but Arkas drew level at 20 all after stopping an attack of Antonin Rouzier.

Another tie followed at 22 before the home side could seal it at 25-23.

Arkas dominated the scene in the opening of the third set (8:3, 10:4) before Rouzier clawed back for Zaksa (10:9) with his great service.

Even though Arkas stormed out to an impressive 14:8, Zaksa attempted a comeback and even cut the difference to only two points (17:15).

IZMIR made some mistakes while Serhiy Kapelus contributed the provisional 20 all after having replaced Samica.

However Ruciak and Rouzier did miss some attacks in the final rush and Arkas could finally celebrate a deserved 3:1 win.

“I am very sorry that we did not score some deciding points but this is not yet the end of the story” says home mentor Krzysztof Stelmach.

On the other side of the net Glenn Hoag praised Zaksa for the determination showed tonight in spite of all problems and injuries that are affecting the team from Silesia.