Great match coming up on Wednesday night in Treviglio

Norda Foppapedretti BERGAMO is basically ready for the home debut in the 2012 CEV Volleyball Champions League with the venue being the “PalaFacchetti” arena in Treviglio. 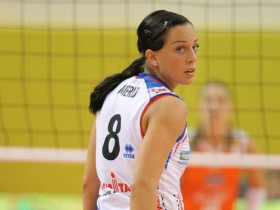 After two years this small town will play host once again to some of the greatest Volleyball stars out there in CEV Volleyball Champions League, starting with a unique match whereby the home girls will play the defending champions of VakifBank TTelekom Istanbul.

After suffering two losses in the national league to Asystel Novara and MC-Carnaghi Villa Cortese, Norda Foppapedretti wants to get back on track by beating the Turkish side coached by Italian-born Giovanni Guidetti.

Libero Enrica Merlo (pictured) and wing spiker Francesca Piccinini will be part of the group after a break to cope with health problems that prevented them from joining the national team for the FIVB World Cup in Japan. “We hope to deliver a good performance, also to the delight of our fans” says head coach Davide Mazzanti.