Kazan, Russia, November 29, 2011. The last couple of matches in the national league were a sort of general rehearsal for Dinamo KAZAN before the first home game of the 2012 CEV Volleyball Champions League that is coming up this Wednesday against the Czechs of VK Modranska PROSTEJOV. 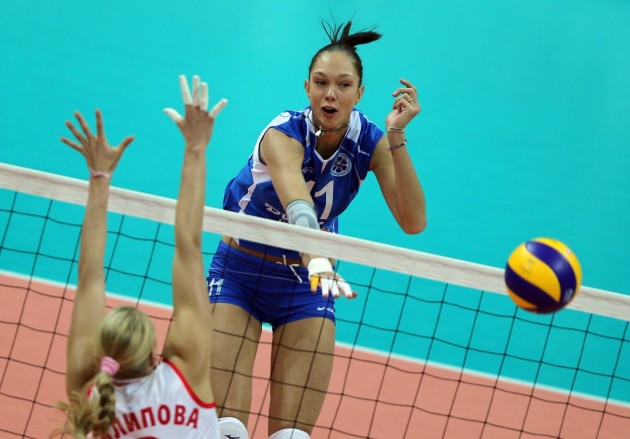 As the national league was stopped in combination with the FIVB World Cup taking place in Japan, Dinamo traveled to Turkey and played there a couple of friendly matches, losing twice (2:3 and 1:3) to Eczacibasi VitrA ISTANBUL.

More recently Dinamo was beaten in straight sets by Dinamo KRASNODAR before claiming a 3:2 win over Uralochka-NTMK EKATERINBURG, i.e. the two teams that are representing Russia in this year’s CEV Volleyball Cup.

Ekaterina Gamova scored a total of 30 points against the side mentored by legendary coach Nikolay Karpol.

“Unfortunately we could not opt for the best starting six in such matches and we are still far away from being in a good shape” says head coach Rishat Gilyazutdinov.

“We definitely can play much better than we did with Dinamo and Uralochka but we have been missing Jordan Larson for the start of the season and our preparations”.

The US American spiker finally made it to Kazan only this past Saturday after a busy summer with her national team and having participated in the FIVB World Cup in Japan thereby claiming a ticket to the 2012 Olympics in London. It is still questionable that Larson will be able to join Dinamo for the home match against the Czechs.

“I do not know much about our opponents but our coaching staff will instruct us properly with some video sessions before the match” states middle blocker Regina Moroz. “We are not nervous or stressed and actually there is no reason to be afraid. As far as I know we haven’t been assigned to the toughest of the preliminary Pools” she concludes.

Boricic: The qualifications are always the hardest