Boricic: The qualifications are always the hardest

While the World Cup was played, Alexander Boricic had two obligations. On the one hand he held the position of Director of the competition one group, while the other, as the head of the Volleyball Federation of Serbia followed the games of women's team that was in another group.

The World Cup has shown that Serbia have a young and promising selection. Against teams such as Brazil, China, Japan, America and Germany, our young and incomplete team has provided great games. Inexperience against American in the second set and who knows what would happen if we manage to solve the set in our favor, it might all be different – say Boricic. 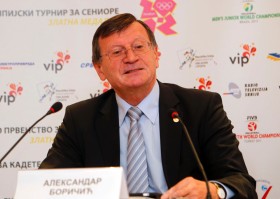 Inexperience was a big “obstruction”, but unfortunately not the only one?

–The accident for us were when Sanja Malagurski get injured, she is one of the most important player for our team. Also Jovana Brakocevic was not sufficiently recovered, and the coaching staff had a lot of problems. But I think the head coach Zoran Terzic react great, save all players, and yet it gave a chance to younger players.

How others react to the games of our girls and how did you see quality of other selections?

–Everybody have only words of praise for the atmosphere, motivation, and the games that provided our team. I did not watch Serbian games live, but I followed through TV coverage. I think that we are against stronger rivals played better, but we lacked the experience. On the other hand, against less quality teams we were not quite as aggressive, but it is a tribute to youth, but I think that we have the quality of most of those games resolved in his favor. About other teams – I think the best teams at this time occupied the first three places. And interesting, the first three, from three continents. Italy was under pressure after the European championships and played a great, Americans are a constant, and China as the tournament progressed, was better. German and Brazilians were a little tired, and Japan had the bad luck to lose against Serbia.

The general impression is that you should not worry about whether our selection will play at the Olympic Games in London?

–We are waiting for spring. I say this because the World Cup we get a few more players. When team is completed, or when they gather all the girls who are willing and able to play for the national team, with the energy and atmosphere that still adorns our teams, I think that coaching staff will be on the sweet torment before qualifying for the Olympic Games. Not that I do not care whether we win the placement, but I believe that we in London to play for a medal –

Many think that is a little unfair to European champion is not directly qualify for the Olympic Games.

-The same system has always been. The qualifications are always the hardest, when the first 15 days to play 11 games, but for those of quality, there are two chances. What would we like to keep players of effort is one thing, but I have to mention the large number, so that was the case in qualifying for the World Cup was played over 200 selections. I would like to see if somewhere there is something

An unwritten rule is that it is most difficult to become a champion on the European continent.

We have in Europe at least 20 selections who can beat everyone and make a surprise. That is why our success, winning two gold medals is something fantastic.

Schweriner SC is ready for first CL appearance in 10 years