Kazan, Russia, February 7, 2012. Russia’s Dinamo KAZAN downed DRESDNER SC of Germany in straight sets last week and is very close to pocket a ticket to the 1/4 finals of Europe’s most elitist competition. 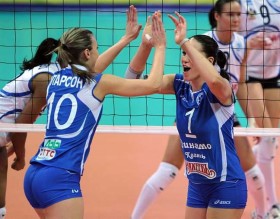 With the return match coming up later this week in the capital city of Tatarstan, Dinamo’s goal is to repeat that classy performance to challenge in the next round the winner of the clash starring Volero ZÜRICH and Azerrail BAKU.

“We always play at 100% and that is why many matches end up in straight sets wins. DRESDNER SC is a good opponent and they are ready to cause a sensation. We will have to play with the same quality that we displayed in the first match and not slow down our pace” says outside hitter Lesya Makhno.

Dinamo has been routing all of its main opponents in the national league having scored three consecutive wins in straight sets with Dinamo MOSCOW, Dinamo KRASNODAR and Uralochka EKATERINBURG to top the standings.

The winning streak of the Tatars comprises a series of 12 matches from the national league.

With Ekaterina Gamova top scoring for Dinamo, the side from Kazan somehow ruined the comeback of legendary setter Irina Kirillova who was back in action after a few years and recently joined the team coached by legendary Nikolay Karpol at 46 years of age.

As for DRESDNER SC, the team from Saxony shares the leadership of the Bundesliga with Rote Raben VILSBIBURG, after edging Bayer 04 LEVERKUSEN in straight sets in the last round of play.

“The result of the first match does not mean that we are going to play a weak opponent” says Russian head coach Rishat Gilyazutdinov.

“We shall always treat all of our opponents with much respect”.