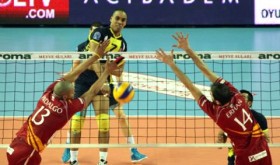 As Emre Batur was starring on blocks for FB Grundig in the first part 6:8, Galatasaray searched for an exit on services, even they attacked so hard, could not pass through Fenerbahce blocks 9:16, approaching to end, FBG spiker Turgay Dogan had consecutive reception errors to 19:22, setter Arslan Eksi notched last point 21:25 with a solid charge.

Guest FB was still faster in second set 5:8, although Cimbom leveled up at 10, a controversial decision brought it 10:14 while Ivan Miljkovic contributed behind service line, Galatasaray’s new transfer Victor Rivera scored on No:4 as yellow canary led second tech time out 13:16.

Local supporters were singing their beloved team, players did not deny this call, Galatasaray caught up the rival at 17, powered another 3 to 20:17, then FBG returned back to 20:20.

Meanwhile, Galatasaray supporters were throwing some items on to the court from the stand, that’s why referee left the tower and gathered other referees, they all went in to dressing room.

Home team resisted via middle player Murathan Kisal in third set but it was not enough to compete with Leonel Marshall only one player 4:8, scoreboard was observed as 8:16 in second gap, Fenerbahce Grundig won the match 3:0 by having last set 20:25 so agonizing.