RIO DE JANEIRO, 02/06/12 - A North American duel will mark the third round of the tournament of Superleague in women's volleyball 11/12. The libero Stacy Sykora of Vôlei Futuro (SP) will receive the center Dani Scott of BMG / São Bernardo (SP), at 21h, this Tuesday (07.02) in the hall Plácido Rochain Araçatuba (SP). 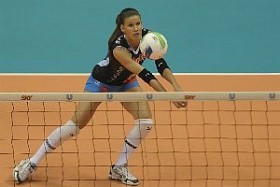 Stacy Sykora is one of the weapons of Vôlei Futuro

Dani Scott and Stacy Sykora were together on the same side of the net, representing the United States in the last great achievements of American volleyball in the campaign that culminated with vice-championship in Olympic Games in Beijing, China.

For Dani, Stacy is a great example on and off the court.

“I have already sent email to her saying he’ll meet her again. She is a grace. That is not only because of her physical fitness, but also because of her willingness to play well regardless of anything. She always has a different way of defending the ball, always give her maximum on the court and that makes the team much more confident, “says Dani Scott.

The BMG / São Bernardo occupies the eighth place on a regular classification with 12 points (four wins and seven losses).

Vôlei Futuro has already appeared in the second place with 26 (nine positive and two negative).

According to the team coach of São Bernardo, Jose Alexandra Devesa, her team needs to be aggressive as to confront the vice-champion in women’s Super League.

“This is a game in which we have to be more aggressive. Vôlei Futuro is the team that is well fitted with a strong block, so it does not matter how many counter-attacks we will have to risk getting the points in the game, ” explains Devesa.

By the side of Vôlei Futuro, the coach Paulo Caco expects a balanced match.

In the first round, the team Araçatuba defeated BMG / São Bernardowith  3:0 in sets.

However, for Paulo Coco, the team of São Bernardo has evolved during the Superliga.

“It will be a tough game. They have been reinforced with Dani and Kathy Scott has recovered from the injury she suffered earlier in the Superliga. There are two experienced players that serve as a reference for the team. Both teams are also very well known. We will have to serve efficiently and keep ourselves alert throughout the game, ” said Paulo Coco.

Germany: Classic in the temple of volleyball