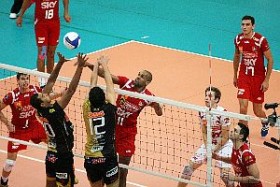 As a result of the confrontation, which was a reissue of the late Premier 09/10, the Cimed / SKY reached 31 points (11 wins and three losses) and secured the leadership in the competition until the end of the third round.

The BMG / Montes Claros is on the ninth place with 15 points (six positive and seven negative).

The central Renato Felizardo of Cimed / SKY, was named the player of the match and took home the trophy VivaVôlei.

The spotman made a point of praising the team in Santa Catarina.

“It was a tough game. Today the Super league is very balanced. We played better as a team and our experience also helped. I’m happy to win the prize in the game like this. I know I am no longer a kid and I try to pass my experience to younger players. It should be congratulated to the team c, and we were able to stay ahead ” said Renato, who scored 10 points in the game (seven attacks and three blockades).

Another highlight of the staff of Santa Catarina was the opposite Rivaldo.

The player increased the production in the third and fourth sets and was fundamental for  the victory of Cimed / SKY.

Rivaldo scored 13 of his 15 points (12 attacks and three blockades) in the last two sets of the game.

“The Super League is very tangled. We are in a good phase and it was important to win this game that had  large exposure. The team is united and we have to keep playing in this way with joy and tactical application,” said Rivaldo.

The best scorer of the match was João Paulo the pointer, of Cimed / SKY, with 16 hits.

The opposite Pereyra, the BMG / Montes Claros, scored 15 times.

On the side of the BMG / Montes Claros, the setter Rafinha was disapointed by the outcome, but not by the action of the Mineiran team.

“Although we lost we played well at times. The Super League is very balanced. We have to forget this match and I think about our next game against Vivo / Minas. We want to qualify for the playoffs and we must not lose, ” said the setter.

It will be broadcast live on The Sportv.

The first point of departure was the counter-attack of the opposite Argentino Pereyra of BMG/Montes Claros.

The Minerian team got better and went to the first technical timeout with two-point advantage (8/6).

The technical timeout was for the home team. With a block of the opposite Rivaldo, the Cimed / Sky turned the score: 9/8.

The pointer João Paulo Tavares, the team of Santa Catarina, got two aces followed and the difference increased to four (14/10).

The BMG / Montes Claros took advantage of the errors of Cimed / SKY and turned its result(16/15).

The hosts came back to play better and to the end of the set  played point by point.

The BMG / Montes Claros returned to the second set willing to change the history of the game.

The tempo of the play for the team of Montes Claros was difficult  the life of Santa Catarina.

In the second technical time, visitors were leading with  nine points (16/7).

The Minerians continued to dominate the set and finished with 25/16.

In the third set was the situation for Cimed / SKY got better.

The pointer João Paulo Travera stood in the attack and Santa Catarina got seven points (12/5).

The hosts went without giving chances for miners along the part and won the third set with 25/10.

The opposite Rivaldo, of the team Santa Catarina, was the best scorer of the game, with eight hits.

After an attack error Argentino Pereyra, of the Cimed / Sky won two points (11/9) and the coach of the BMG / Montes Claros, Jorge Shimidt, requested timeout.

The time was good for the Minerians, who equaled the result. The game continued point by point. However, in the end, the home team has invoked the greatest experience of its crew and finished the set with 25/22 and the match with 3:1 in sets.

The setter Rodriguinho, of the Campinas team, was named the  best on court and took home the trophy VivaVôlei. Even in defeat, the best scorer was the opposite Filip, of the weaker team. The Czech scored 26 points. Next Wednesday  (8:02) Medley / Campinas will  play the game , from 19:30, against Vôlei Futuro in the hall Taquaral in Campinas (SP). Vivo/ Minas, on the same day and at the same time, have a classic easy game ahead. The team will travel to Montes Claros (MG), where it faces the BMG / Montes Claros (MG).

SuperLiga MALE 11/12
THIRD ROUND OF THE TOURAMENT

Germany: The Ladies of Aachen are looking for the risk