Germany: The Ladies of Aachen are looking for the risk

If it had been for the form and level in performance, the volleyball players of the Schwerin SC would not have a difficult game with the "Ladies in Black" from Aachen on Saturday. But the coach Teun Buijs warns against a frivolous victory. 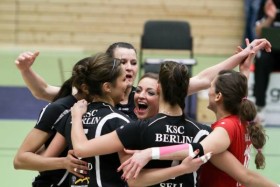 The Ladies of Aachen are looking for the risk

How hard and experienced the ladies of Alemannia played , the team has learned even in the first set, SSC could win only after 5 sets with 2:3 (tiebreak: 15:17).

At the beginning of the season Aachen claimed that the first eight playoff teams will come.

But at the moment the team is on 10th place with 12:24 points on the scoreboard.

For the last five games Aachen has been waiting for the feeling of victory.

However, it is not be the type of players coached by Stefan to slip up without resistance in the league. You have to understand the team leader Karoline Bednarova outside attack or in the attack an experienced middle blocker Anke Borowikow, in their ranks to take advantage of their opportunity.

In the assumption the major weaknesses disclosed in the last game of Aachen to Dresden have led Stefan moths in preparation for this game and certainly had consequences.

He wants to pursue his concept even further against Schwerin, which says: work, work, work and find the risk.