Constanta, Romania, November 29, 2011. The local sports hall was almost sold-out on Tuesday night as the players of 2004 Tomis CONSTANTA celebrated their debut in the 2012 CEV Volleyball Champions League by playing the winner of last year’s Challenge Cup, i.e. Azerrail BAKU. 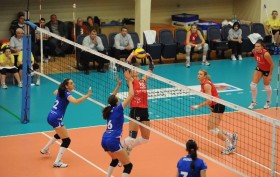 Approximately 2’000 spectators were in attendance – including a group that had traveled to Constanta from Bucharest, some 200 km away from the Black Sea coast – but Azerrail eventually edged the home side in straight sets (25-19, 25-18, 25-22).

The game – that was aired nationally – attracted great interest especially as the teams were lining up elite players that recently participated in the final round of the CEV European Championship as well as in the FIVB World Cup just completed in Japan.

Tomis and Azerrail started cautiously but some errors of the Romanian girls helped BAKU claim the lead at the first technical time-out (8:4). That gap was gradually stretched and Azerrail finally wrapped it up at 25-19.

The home side caught a good start in set 2 (3:0, 8:5) but the guests from Azerbaijan took control of the operations by the second mandatory stop and sped up for the final 25-18.

Darko Zakoc, head coach of 2004 Tomis CONSTANTA, commented: “It was a very special situation as we could not work with our starting six until yesterday. We have to fix our problems and improve the quality of our play. It was anyway a good experience and especially that third set was highly contested”.

Best players of the game were Claudia Gavrilescu and Cristina Cazacu for the home side, while Azerrail was paced by Polina Rahimova, Oksana Parkhomenko and Heather Bown.