Schwerin, Germany, November 29, 2011. One of the most exciting Volleyball nights celebrated since a long time at “Sport – und Kongresshalle” in Schwerin ended with Eczacibasi VitrA ISTANBUL of Turkey defeating the local heroines of SCHWERINER SC 3:1 (18-25, 25-14, 25-22, 25-20) for the opening round of the 2012 CEV Volleyball Champions League. 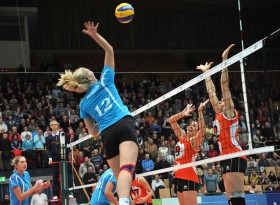 The second set was exactly the opposite. Eczacibasi dominated with strong serving and was leading quickly 5:0. SCHWERINER SC never found its way back into the set and made too many mistakes. The game was too quick for the SSC ladies and therefore ISTANBUL claimed that set with a comfortable 25-14, anchored by 9 points contributed by Neslihan Darnel.

SCHWERINER SC regrouped in the third set and gave Eczacibasi a great fight, leading for most of the set by a small margin. Under standing ovations by the home crowd ISTANBUL fought back turning the score around to a 25-22 win, with a great Neslihan Darnel contributing again 8 points.

The fourth set was another close one in which both teams played top level Volleyball getting the crowd on their feet again. Due to some small mistakes by the SSC on decisive points and a great defense of Eczacibasi, the record champion from Turkey finally won the match by beating the SSC with the score of 25-20 in the fourth set.

Match winner for Eczacibasi VitrA ISTANBUL was clearly Neslihan Darnel who dominated with powerful spikes throughout the entire game.

SSC head coach Teun Buijs acknowledged and praised that strong opponent from Turkey: “We had a hard time coping with their strong services, especially in the second set. We fought back well a few times but all in all we made too many mistakes in decisive situations and Eczacibasi put a lot of pressure on our defense”.

ISTANBUL coach Lorenzo Micelli was impressed with the great atmosphere in the arena in Schwerin: “We expected a strong German team and luckily we went home with a big win. Together with that amazing crowd Schwerin made us play our best Volleyball”. Although the home heroines lost their game to a strong team from Turkey, being back in the CEV Volleyball Champions League inspired everybody in Northern Germany.