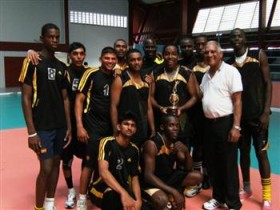 The festival attracted a host of teams from across the country and featured two sections.

Up first was the four-a-side competition, with all matches played over eight minutes.

Many of these matches featured female players against junior males and “mixed teams” as well as “beginner players” against “B” players of more established teams.

The Guyana Hockey Federation female team caused a major upset during this part of the tournament after defeating the “B” players of the national under 19 team, prompting many officials to ask whether they should give volleyball a try.

The second section of the day saw Demerara and Berbice clash in a match described as a relay format, with the first six of each team playing for 10 minutes (with no time outs or substitutions) and the second six continuing for the next 10.

The match proved to be a fitting climax with both teams producing some exciting rallies.

Demerara led 18-15 at the first changeover before Berbice rallied back with the score tied at 32-32 when time expired.

The officials decided on a one minute playoff and the Berbice players held their nerve to triumph 34-33.

The event was deemed highly successful by volleyball players and fans alike, particular because of the interaction between regular players and beginners.

“This was the most fulfilling birthday present I ever got,” Shuffler said at the end of the day, before congratulating the Berbice team and presenting captain Errol Yannick Chase with the trophy.

President Shuffler also thanked all associated with the successful event and called for more continued support in the future.