CEV CL: It is Vakifbank, yet again, to claim Turkish derby 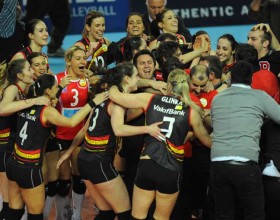 It is Vakifbank, yet again, to claim Turkish derby

With Neslihan Darnel and Mirka Francia being simply outstanding Eczacibasi started the match with a great pace (8:2, 16:8) rapidly pocketing the opening set by containing a possible comeback of Vakifbank anchored by Malgorzata Glinka.
Vakifbank got back on track in set 2 (8:5, 11:7) but Darnel called for the 13 all and forced a time-out by the 2011 queens of Europe. Vakifbank went up 20:17 but the guests fought back to 21 all, before team captain Gözde Sonsirma Kirdar finished the set with two consecutive blocks (25-22).

The turning point of set 3 came as the score stood at 15:12 for Vakifbank, as Darnel got injured and was forced to leave the court. Eczacibasi scored nevertheless the next four points and went up by the second mandatory stop before wrapping it up at 25-22.

Vakifbank dictated the pace of the game in set 4 (8:6, 16:13) and never looked back; even though Eczacibasi tried out many substitutions, that did not work and Vakifbank called for the tie-break. The team captained by Sonsirma went up 6:4 there but Eczacibasi drew level at 6 all; Vakifbank was again in the front (8:6, 10:6) and even though Eczacibasi got back to -1, Vakifbank could start the celebrations after Sonsirma finished it off at 15-13. In spite of her injury, Neslihan Darnel was the best scorer of the game with 24 points.

Argentina: The Start of Grand Prix will define the two remaining finalists