Argentina: The Start of Grand Prix will define the two remaining finalists

San Juan will be the host the tournament for Obras, Ciudad de Buenos Aires, Pescadores de Gualeguaychú and Club Atlético, that will struggle for the available places. Meanwhile, UNTreF Voley and Ciclista Olímpico are expecting rivals. 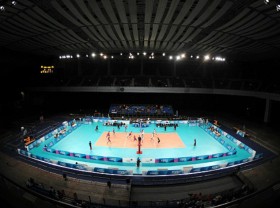 The Start of Grand Prix will define the two remaining finalists

The regular season ended and Series A2 Men unleashes the final stages. Next Friday will start the Grand Prix in which four teams will face each other and define the other two semifinalists (UNTreF and Ciclista have already qualified). The tournament will be held in the City of San Juan in which Obras will be the host. Indeed, the club got the chance to organize it due to finishing in the third place with 29 points (9 wins and 7 losses).

The team of Marcelo Rubinich, coming off five victories in the last six  games where it only lost against Ciudad de Buenos Aires, will debut in this new event against Club Atlético Lanús  , on Friday from 22:00pm. The team led by Marcelo Benavídez finished sixth on the scoreboard and thanks to its two victories in the final four games (Ciclista Olímpico and la Selección Menor) obtained the access to the final game. The clashes between the teams during the regular season ended with victories for the guests: Buenos Aires won 3-0 against Obras and San Juan won  3-2 against “Granate”.

On the other hand, the 4. will face the 5., Ciudadad and Pescadores de Gualeguaychú , also on Friday from 20h.With the set of Núñez, 28 points  were accumulated this season,10 wins and 6losses while Entre Rios finished with one point less (11 wins and 5 losses). Regarding the encounters between these teams during the regular season, finished with two victories at home, “Muni” won 3-0 in the first game and the team led by Joaquín Sartori won 3-2 in the seventh weekend.

Finally, after this series of meetings, the two best in the Grand Prix will have access to the semifinals, the first Ciclista Olímpico and the second  UNTreF Voley. Each of these teams will define the best of three games.

CEV CL: It is Vakifbank, yet again, to claim Turkish derby

Argentina: The schedule of games Grand Prix Series A2 Men