Fenerbahce Universal ISTANBUL downed VK Modranska PROSTEJOV in straight sets (27-25, 25-19, 25-14) with some 3’700 spectators in attendance at “Burhan Felek” Volleyball Hall to advance to the 1/4 finals of the 2012 CEV Volleyball Champions League and play there the 2011 club world champions of Rabita BAKU. 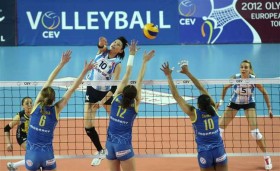 Fenerbahce started well (8:3, 16:11) with US American Logan Tom scoring quite many points but Modranska fought back bravely to draw level at 24 all. However, a couple of errors did prevent the Czechs from completing their comeback and Fenerbahce pocketed the opening set at 27-25. Even though the guests went up 8:7 by the first mandatory stop of set 2, their “flame” was quickly gone with Fenerbahce going up 16:11 to quickly wrap it up at 25-19. As Fenerbahce was setting the pace at 13:7 in set 3, the fans started their usual choirs celebrating in advance the great win of their heroines (25-14). Logan Tom paced Fenerbahce with 13 points.

“The rosters of our teams are so much different, they have very experienced players and played great Volleyball; Fenerbahce fully deserved to win” says Modranska mentor Miroslav Cada.

“They played very well last week but did not do so today. We made some stupid errors in defense and with our blocks in the opening set but were able to recover” stresses Fenerbahce coach Zé Roberto. “We played better than we did last week and this was important because the knock-out stage is always very dangerous” concludes top scorer Logan Tom.

Argentina: San Martin won and will try to narrow the distance to the champion, next week in Formosa

Participation in CL is a true honor...