Argentina: San Martin won and will try to narrow the distance to the champion, next week in Formosa

The team of Marcelo Arias defeated Selección Argentina Juvenil with 3-1, in sets: 22-25, 25-15, 25-21 and 25-20 and next week will try to use their advantage of playing at home to get closer to the top of the Argentina Women's League. 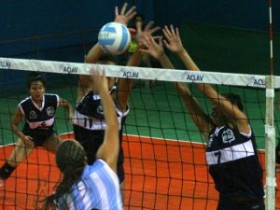 San Martin won and will try to narrow the distance to the champion, next week in Formosa

In the 1.set, both teams started with a weak reception and primarily because of that failed to take off to the final part. However, there appeared a good service of Selección Argentina Juvenil to break the opponent, finishing the set with the counterattack of the center Sol Píccolo.

They dominated in the2. set. The girls were led by Guillermo Cáceres were very erratic from the service while Formosa took advantage by the play of Brazilian girl Beatriz De Souza when averaged the set. In the end, the coach of Juvenil tried to make some changes, however, San Martin led ahead of the “kid” by 25-15.

The 3. Set was also very even, maybe a little more than the previous one, with long points and fighting. Again from the point of Carioca reception, the coach of Formosa made substitutions in the Juvenil team in the 1. set but got the reaction from the defense and counterattack to level the result. Still, San Martín was able to finish the set with 25-21.

At last, the players conducted by Marcelo Arias achieved the distance from the beginning , using the errors  of the rival. In order to substitute the players, both coaches made several changes to their schemes and moved the result. However, the duel maintained parity with Piccolo and Michelle Fabiani as the best scorers of Selección Argentina Juvenil in the set, while De Souza and María Grisón were the best of Formosa. Thus, the host got a major championship victory, the second in the row, after winning the fourth set by 25-20.

Argentina: The schedule of games Grand Prix Series A2 Men