CEV CC: Return match is cancelled in Romania because of bad weather

Nicosia, Cyprus, February 10, 2012. The adventure in the European Cups – and namely in the 2012 CEV Volleyball Challenge Cup – of Nea Salamina FAMAGUSTA came to an end this week in some difficult circumstances, as the Cypriot club decided to accept the cancellation of the return match with Tomis CONSTANTA after getting stuck for a couple of days in Bucharest. 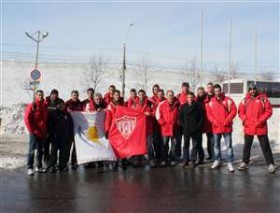 Return match is cancelled in Romania because of bad weather

After having traveled this past Sunday to Romania’s capital city the team was supposed to make it to the Black Sea by bus but heavy snowfall and very bad weather conditions did impede their transfer to Constanta.

On Monday the Romanian club had arranged a trip by train for the guests from Cyprus but unfortunately the train stopped only a few km after leaving Bucharest, once again as heavy snow was causing additional disruptions.

The players and officials of Nea Salamina spent some 7 hours being stuck there before they were finally driven back to Bucharest by bus.

By that time the team was given two options: to re-schedule the match or to stay in Bucharest waiting for the weather to improve thereby having the opportunity to enjoy a safe transfer to Constanta.

However, the “gods” were not that sensitive and finally everyone involved had to ascertain that there was no way to make it to the Black Sea by plane, train or bus.

After intensive negotiations that involved the CEV, the Romanian and Cyprus Volleyball Federations as well as the two clubs, Nea Salamina finally accepted the cancellation of the return match, with Tomis CONSTANTA eventually making it to the 1/4 finals having taken the previous game played one week earlier in straight sets.

“We had no other option but to accept this proposal” say Cypriot officials, “because the players were literally exhausted. Additionally, the result of the first game did not leave much hope for making it to the next round of the competition and therefore we felt it was not worthy to go through all this once again”.

This was the first time since 1982 that a Cypriot club was eliminated from the European Cups due to force majeure.

Even though their adventure finished quite unexpectedly, still the players and officials of Nea Salamina are already very much looking forward to the next European Cups season.