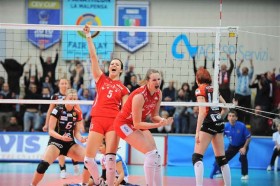 Golden set contributes ticket to Challenge Round for Yamamay

The next opponent for the leaders of the Italian league will be Germany’s SCHWERINER SC that “comes down” from the prelims of the 2012 CEV Volleyball Champions League.

The match did not start well for the home side as Aluprof displayed great blocks and was anchored in offense by Natalia Bamber (23-25).

Christina Bauer played the drums for the home side in set 2 with Aneta Havlickova contributing quite many points for the 1:1.

The Czech duo composed by Havlickova and Helena Havelkova made the difference for Yamamay in the third set, totaling some 12 points, and paving the way for a massive 25-14.

With a very solid block and defense system, Yamamay could control the game also in the fourth set with Dutch spiker Floortje Meijners scoring the last couple of rallies that called for the golden set.

There Yamamay trailed 7:9 but Chiara Dall’Ora – MVP at the end of the game – clawed back courageously with Havlickova (top scorer with 24 points) finishing it off with a block (15-13) for the joy of some 2’000 fans in attendance.

“My congratulations to our opponents:  they are really a tough team. They played some great Volleyball already last week in Poland and here they repeated that same feat by causing us real problems. We played with great determination and before the start of the golden set we had agreed upon playing point by point, making sure we were not going to commit mistakes. We were good in fulfilling this task and deserve the ticket to the next round” says Yamamay captain Helena Havelkova.

CEV CC: Return match is cancelled in Romania because of bad weather