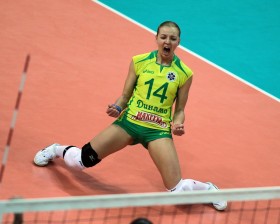 The players of Dinamo looked nervous and went immediately down 0:4 in the opening set before Ekaterina Gamova scored the first points for her side in the history of the competition. Dinamo was up 22:19 but with some excellent blocks and a service winner of Veronika Hroncekova the guests sealed the final 23-25.

Dinamo was highly sidelined in set 2 by a terrific number of unforced errors, with Gamova and Lesya Makhno missing many of their attacks. As Modranska set the pace 13:8, local head coach Rishat Gilyazutdinov substituted Olga Khrzhanovskaya for Marina Babeshina (Sheshenina) but it did not help much. Israeli but Russian-born Anna Velikiy easily found a way through the block of Dinamo to close it at 25-20 for Modranska.

The Russians finally played more relaxed in set 3 with many different combinations in attack and putting real pressure with their serving. Marina Babeshina found the right chemistry with her mates and Gamova profited of her height to pass the block and claim the final 25-18.

Jordan Larson stood out for Dinamo in set 4 and together with Gamova she helped seal it with an impressive 25-15.

Gamova took her side by the hand in the tie-break with five attacks and an ace to make it 7:2 for Dinamo; however, Modranska fought bravely cutting the gap to the minimum (12:11) but Dinamo finished it off with an ace of Khrzhanovskaya.

Gamova top scored with 25 points while Sanja Popovic totaled 20 for the visiting team.

“We played well in defense” says Miroslav Cada, the head coach of VK Modranska PROSTEJOV. “But our contenders were better at serving. When Ekaterina Gamova started playing her own game, we got into trouble. Before the match I didn’t think that we could be so close to the victory and therefore I am pretty satisfied with the result”.

“This match proved that there are no weak competitors in the Champions League” adds Rishat Gilyazutdinov, the head coach of Dinamo KAZAN. “We’ve been training hard but we are not in our best shape at the moment”.

CAVB Board of Administration nominees decided