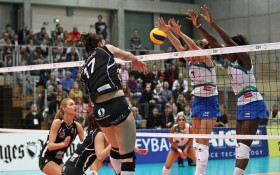 Neither of the two teams had a lot of time to prepare for their debut in the 2012 CEV Volleyball Champions League as absences due to the activities of the various national teams bothered the preparations. However, Volero got into the game much better than Atom Trefl.

The Swiss girls played a strong first set, leading from the beginning. Playing smart and concentrated they never slowed down their pace and sealed it at 25-19.

The second set was close until 10:9, then – thanks to a series of strong serves by Olga Sazhina and 6 great blocks – Volero clipped a margin of 12 points. Full of self confidence the Swiss team anchored by Jelena Alajbeg (who scored a total of 19 points) won the set clearly at 25-14.

The rookie from Poland was evidently under pressure but the guests started the third set very concentrated and let Volero no chance to fight back (14-25). It seemed that Atom had needed two sets to find its way into the game.

Head coach Alessandro Chiappini stated in the end: “I told my team: if you are willing to fight, this match can be long”.

And so his mentees played strong, concentrated and efficient whereas Volero had great difficulties while defending their wicked attacks. At the score of 7:13 local head coach Svetlana Ilic made a few changes, but didn’t succeed to stop the march of SOPOT. Strong serves and great blocks paved the way for the final 15-25.

The fifth set had to determine the final winner of that clash. Loudly supported by 875 spectators the Swiss girls found back their best play leading by three points at the beginning but it was only a short joy. Helped by US American Megan Hodge who scored 4 points in the tie-break (for a total of 17 in the match) Atom played an almost perfect game and won the set 15-9.

Atom captain Izabela Belcik explained the weak start: “We are a new team and we only practiced for one week. After the first two sets we found the right chemistry and team work”.

Despite the loss Volero head coach Svetlana Ilic was proud of her team. “They followed precisely the tactical inputs I gave them. But as soon as Atom got into the game we had to take more risks and so we made more mistakes”.