Treviglio, Italy, November 30, 2011. The winners of the past edition, VakifBank TTelekom ISTANBUL of Turkey, debuted on Wednesday in the CEV Volleyball Champions League by outclassing former titleholder Norda Foppapedretti BERGAMO in straight sets (25-14, 25-20, 25-17) for their opening match in Pool D. 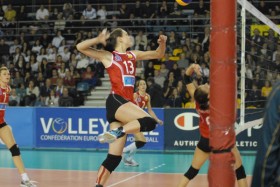 VakifBank dictated the tempo in the opening set with a solid defense and the attacks of Jelena Nikolic and Malgorzata Glinka. The home side started set 2 very determined and that section of the game turned into a neck-to-neck race, but ISTANBUL eventually came out on top. The plot did not change in set 3 with VakifBank wrapping it up pretty quickly for the final 3:0.

Malgorzata Glinka was named MVP with her 16 points and 48% of efficiency in attack.

“I am not satisfied with this match. After losing a couple of clashes in the national league our goal was to play good Volleyball, but we still suffer from the injuries that affected us in the past weeks. We have to work hard to get the right physical condition but it is important to learn also from such games” said home head coach Davide Mazzanti, whose next opponent will be Azerrail BAKU this coming December 7.

Enrico Marchioni: We have decided to find replacement for Zhukouski