The thirty’s edition of the annual Arab Club Championship will be hosted by Lebanon in the Capital Beirut 17 to 27 February 2012 with 20 participating teams representing 13 countries including 5 African and 8 Asian NFs. 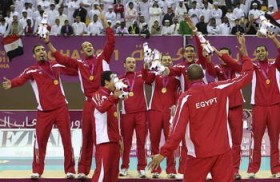 The current leader of the Algerian National Senior Championship Bejaia (MBB), will fly on Wednesday to Beirut to participate in the competition as one of the heavy favourites.

The objective of the team according to the technical staff Mebarki-Kaci, is to look for the title and aim for top of the podium. MB Bejaia will play in Group D alongside Bahri (Iraq), Al Kalmoun (Lebanon), Sahm (Sultanate of Oman) and Al Arabi (Kuwait). Matches of groups “A” and “B” will compete at Bouchria Michel El Morr Hall, while matches of “C” and “D” will be played at the hall of the sports club Ghazir Kesrouane.