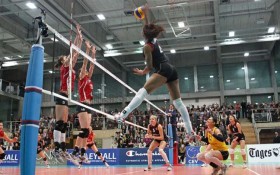 In 3. set the players of Baku showed excellent performance and defeated their opponent with 25:11.

But in golden set Dinamo Kazan won 10:15 and qualified for next round.

It looks like Dinamo concentrated exclusively on this chance to pocket a ticket to the final four and eventually this strategy paid off after Azerrail had totally dominated the “real” return game played on Tuesday.

Belarusian Aksana Kavalchuk finished the game by topping the charts of the best scorers with 14 points but to the disappointment of the local fans Azerrail will be missing the last act of Europe’s finest competition which is set to take place there in the capital city of Azerbaijan in some 4 weeks.