In the playoff of European Championship League for Men VFB Friedrichshafen against lost Zenit Kazan 0:3. 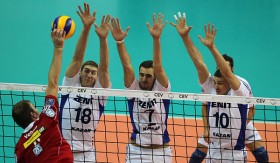 “I am satisfied with the result” said Zenit KAZAN coach Vladimir Alekno after the match.

“Our goal remains to seize the trophy as we want to take that crown from TRENTINO Volley” he added.

“I still have to congratulate my team” stressed the home mentor Stelian Moculescu who was not too disappointed. “It is a pity for today but I am satisfied with our campaign in this competition even though I would have loved to have seen at least one more set”.

In the charming “ZF Arena” some 3’900 fans tried everything they could to push the home team. The Germans fought for every single ball, but KAZAN was simply too strong and unstoppable tonight.

The Russians served better, had a better efficiency ratio in attack and killed more blocks too. “KAZAN played at the highest level” said Moculescu. “We were not able to compete with them”.

Also Oliver Venno could not avoid the defeat. After he had injured his ankle 17 days ago the Estonian opposite played right from the start and was with 14 points the best scorer of his team. But he could not reach the level of Maxim Mikhaylov from KAZAN, who scored 19 points and was the best player of the match.

“I am sad that we lost, but I am happy that I got the chance to play”, said Venno. While KAZAN is now looking forward to the final four coming up this mid March in Poland, FRIEDRICHSHAFEN starts immediately with the preparations for its next highlight.

This Sunday the team from the Lake of Constance will face its main domestic opponent, Generali HACHING, in Germany’s cup final.

“Winning the cup is one of our most important goals this season”, said team captain Joao José. “The Champions League is over now. There is no excuse anymore”.