Drean Bolivar defeated on its court Jujuy Voley with 3:0, partially 25:18, 30:28 and 25:20 in the final game of the regular phase of Argentina's Volleyball League Card Native Nation. With this result, Bolivar is the first. 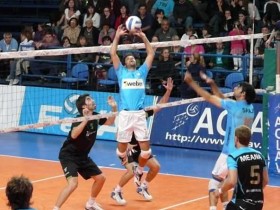 Weber surprised at the start with the substitution of Jekic and Crer with Arroyo and Giani. The guests took the lead of 2-5.
Then Weber requested first timeout to rearrange the positions and with the block of captain Arroyo evened the result (8-8).
The center, Sebastian Sole blocked Dos Santos and sent his team in front of the marker (16-12).
Mercau’s attempts to secure the lead were in vain, and Bolivar won the first set 25:18, thanks to the block of Crer.

As in the first set, Jujuy was at start ahead (2-5) but Bolivar reacted instantly. Until the first technical timeout  it was 8:7 for the hosts. However, Jujuy did not give up and regained partial domain, led by Mercau (15-17). Good defense and block of Drean Bolivar evened the result (18-18).

The Eagles defended 2 set balls and after Mercau’s error won the set with 30:28.

The third set started favorably for Bolivar with a good performance of Evandero, leading with 6:4. The ace of Bernasconi tied the game (10-10). Bolivar immediately regained the advantage with Crer, who blocked two consecutive opponents’  attacks, and Evander, who scored an ace. Then the result was 15:11. From then on, Filardi and Evandro with attacks led Bolivar to the victory. Finally, Bolivar finished the set with 25:20.