Trento, Italy, February 29, 2012. Italy’s TRENTINO PlanetWin365 and Lube Banca Marche MACERATA will extend their rivalry on Thursday as they play their return match for the Playoffs 6 of the 2012 CEV Volleyball Champions League – Men with a ticket to the final four at stake. Having already crossed their ways twice in the national league, in a classy final of the national cup and last week, these teams have regularly delivered a real Volleyball show so far. 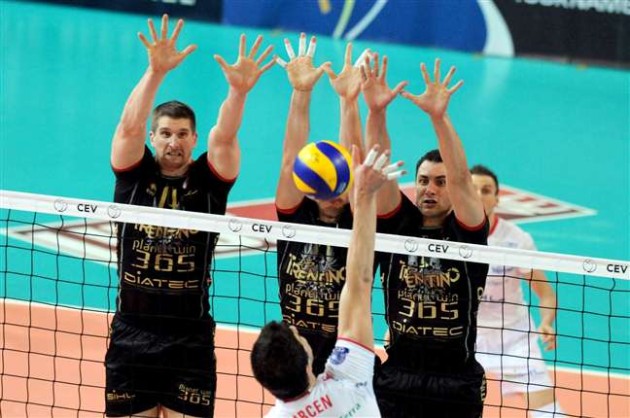 Italian titans to cross their ways again on Thursday

After dominating the European scene for the past three years, TRENTINO is most probably having the toughest match in recent times after losing last week in Macerata at the tie-break.

They first need to score a home win and then, regardless of the final score, a golden set will determine the side advancing to the last stage of the competition.

Head coach Radostin Stoytchev will have all players at his disposal, including middle blocker Emanuele Birarelli and the starting six will be as usual: setter Raphael, opposite Stokr, middle blockers Djuric and Birarelli, Bari as libero plus Juantorena and Kaziyski as wing-spikers.

“We cannot make any mistakes on Thursday; it is our last chance to make it to the final four” says Stoytchev. “It will be a sort of anticipated final and it is one of the most important matches this season. We are not in the best situation since we missed last week at Fontescodella on a good opportunity to play more relaxed at home. By the way I think that it is in moments like this that the real team spirit comes out and I hope that we will show it off on Thursday” he stresses.