On February 22nd, the vice-president of women’s volleyball federation, Leila Mohammadian in a meeting with Mitra Shabanian negotiated on the coach of Iranian women’s national volleyball team. 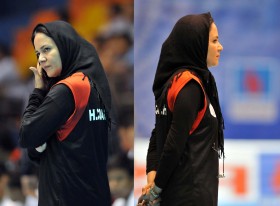 According to the public relations of volleyball federation in this meeting which was held in Mohammadian’s office,the preparation plans of the national team and technical cadre were discussed and Mohammadian accepted the responsibility and embraced helping the national volleyball team.

Shabaniana who was the coach of the national youth and junior teams in recent years and now is concerned with teaching in the university, after this meeting told to the public relations of the Volleyball Federation: It was a good and positive meeting. We have analyzed the situation and everything is fortunately approved by both sides. But I asked Ms. Mohammadian further time till Saturday to declare the final decision. It is 80% ok now but it must be more scrutinized.

The vice president of the women’s volleyball federation added: Shabanian is the one who can help me on this job in the national team. She deserves to have this job and she also welcomed the suggestion. However the final decision is to be announced on Saturday.