Gent, Belgium, February 29, 2012. Belgium’s VDK GENT Dames and Poland’s Impel Gwardia WROCLAW will be trying to prolong their fairytale in the 2012 CEV Volleyball Challenge Cup tonight via the return match for the 1/4 finals that follows the away win of the Belgians from last week. 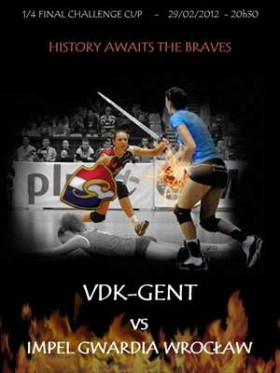 Impel Gwardia lost last week by committing many mistakes during the tie-break but got back on track in the national league by edging their rivals from Bydgoszcz, with the goal to end up in the top five of the national league to qualify also for the next edition of the European Cups.

The club has announced it will change its official denomination starting with next season with Gwardia being dropped also from the logo after 67 years.

As for VDK GENT Dames, the club started four years ago a very ambitious project whereby all players – who are not professional – shall be able to combine top sport with their studies.

This is finally delivering the wanted results after that side debuted in 2009 in the CEV Volleyball Cup losing to the eventual winner of the competition, Yamamay BUSTO ARSIZIO of Italy.