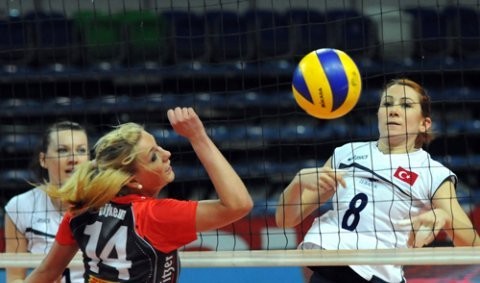 With a sold-out house and some 1’800 spectators in attendance, the home side was able to storm back from 15:20 in the opening set to get back on track; VfB 91 SUHL did profit of some strong serving delivered by Czech Vendula Merkova but finally it was one of the reserve players, Christina Speer, who sealed the deal with an ace for the final 29-27 and for the joy of the local fans.

The guests from Turkey looked somehow impressed by the great atmosphere created by the audience while VfB 91 SUHL played with great tempo to claim a margin of 6 by the second mandatory stop (16:10) and hence control the remainder of set 2 to get a comfortable 2:0 lead (25-18).

VfB 91 SUHL dictated the pace of the game also in the third set going up 17:13 but this time the guests were able to claw back and tie the score. However, with the help of top scorer Merkova the home side changed gear again and could eventually finish it off in three straight sets to fire up the party together with the fans.