This Wednesday at 5.30 pm Asseco Resovia RZESZOW will be hosting at “Podpromie” sports hall the first final match of the 2012 CEV Volleyball Cup against Russia’s giant Dinamo MOSCOW. The return game in Russia’s capital city will be played this coming Sunday at 6 pm local time. Both teams are very determined to win this competition as the CEV Cup was one of their main goals since the beginning of the season. 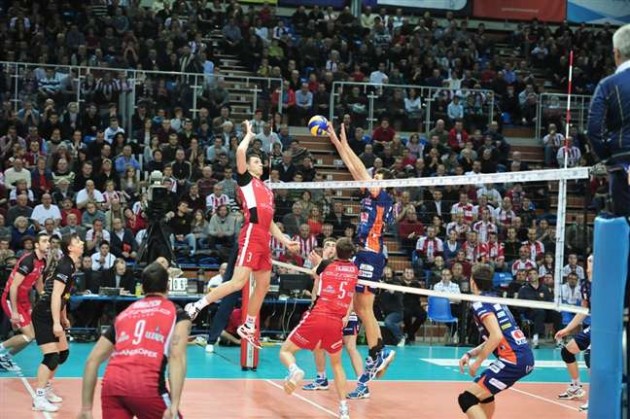 “Such matches are very special thus every player will give his best in order to clinch this prestigious European cup. All Volleyball fans can expect a fascinating spectacle and a lot of emotions” says Aleh Akhrem, the captain of Asseco Resovia. There is no question about the fact that the first final game in Rzeszow will be a big event not only for the local community but for the whole Volleyball family in Poland. All the tickets were sold-out right after the start of the ticket-hunt so the “Podpromie” sports hall will be definitely packed.

“I have never played in Poland so it will be a new, very pleasant experience for me. I know this unbelievable atmosphere in Polish sports halls only from the television. This time I will find out how it feels to play in front of such a fantastic public. I’m very excited about that” admits Peter Veres, Dinamo wing spiker and one of the leaders of the Russian team.

Both teams have never won the CEV Cup in their glorious history; however, they have some experience and successes in the European Cups, especially the Russian team. Dinamo MOSCOW has won the Cup Winners’ Cup in 1985 and played in the final of the CEV Cup in 1991 and 1993. Since 2007 until the last season the Muscovites played 3 times in the final four of the CEV Volleyball Champions League claiming 3 medals in the most prestigious European club competition (silver in 2010, bronze in 2007 and 2011).

The local team – Asseco Resovia RZESZOW – has already competed in seven finals of the European Cups in the past decades. The best result in the international competitions dates back to 1973 (second place). In 2008 Resovia finished fourth in the Challenge Cup while last year the guys from southern Poland advanced to the semis of the CEV Cup to be edged there by Italy’s Sisley TREVISO.

In this edition of the CEV Volleyball Cup Dinamo MOSCOW was the biggest favorite since the beginning of the competition. However, the runner-up of the 2011 Russian Superleague did not have an easy journey to advance to the final. “Our difficult road towards this final is incredible as we had to pass really strong teams from Belgorod, Ankara or Monza in the previous rounds. I thought that it would be much easier for us to get to the final of the CEV Cup comparing to the Champions League but we had to fight a lot in order to be at this stage of the competition. Anyway, we are very determined to win the trophy. This is very important for us and our sponsor. Our club didn’t win any final since the Russian championships in 2008. We also didn’t claim any European Cup for many years and the ambition of our main sponsors is to promote Dinamo all over Europe. I think that we are in a more favorable situation than Resovia because we are the hosts of the second and decisive leg. All team play usually better at home and we have to take benefit of this schedule. We feel very strong at this moment. I wouldn’t say that we are the favorites of this duel but I think we have more chances to win the trophy” claims Peter Veres.

On the other hand, Asseco Resovia RZESZOW is also longing for the CEV Cup despite the fact that the return game will be staged in Russia. “Dinamo MOSCOW is a very strong team, definitely the toughest opponent that we have met so far in the CEV Volleyball Cup. Nevertheless, I think that my team has a big chance to win this duel against the Russian team. The first leg at home will be crucial for us. We have to win this game in order to get some psychological advantage over our rival. If we want to score that home victory, we have to deliver a majestic performance. My players have to play at 110% otherwise it will be very difficult for us to seize the night. I’m sure that my players will square off by showing great determination and belief in victory” reckons Andrzej Kowal, the head coach of the Polish team.

“We will give our best in order to defeat Dinamo. They are a very powerful team but we shouldn’t be afraid of them even if they look a little bit stronger than our team, at least on paper. They are not invincible. I am very positive about my team as all the players are very determined and focused on that game. In the last few weeks we showed that a wide and solid roster is our main strength. We need that unity and team spirit in the final games against Dinamo. We have to do our best in order to win this home match. We have fantastic fans and we should take benefit of their support. Our strong service will be vital as we have to hamper their quick and efficient play in attack. The main condition is our best possible performance. We can count on our frenzied fans in Podpromie sports hall but above all – we have to show great Volleyball” adds team captain Aleh Akhrem.

“It’s difficult to make any predictions before the final games as everything is possible and depends on our as well as our rivals’ performances on Wednesday and Sunday. However, this first game in Podpromie sports hall is very important and special for our team. I hope that we will be able to play our best. Beside this, as far as this Polish-Russian duel is concerned, I was very sorry that the Polish champion, PGE Skra BELCHATOW, didn’t manage to win the Champions League despite the big chance they had to defeat Zenit KAZAN in the great final in Lodz. It would be nice if we could beat Dinamo MOSCOW in the CEV Cup and give some joy to the fantastic Polish supporters” concludes Georg Grozer, the leader of Asseco Resovia.