The ladies of Yamamay BUSTO ARSIZIO extended on Saturday night Italy’s supremacy in the CEV Volleyball Cup – which has been lasting for 15 years – by claiming the return match with Galatasaray ISTANBUL 3:1 (25-19, 25-13, 23-25, 25-23) and afterwards also the deciding golden set (15-9) to redeem their away defeat from this past Tuesday in Turkey’s megalopolis. With this result Yamamay celebrates its second European trophy after having claimed the CEV Cup already a couple of years ago in Baku. 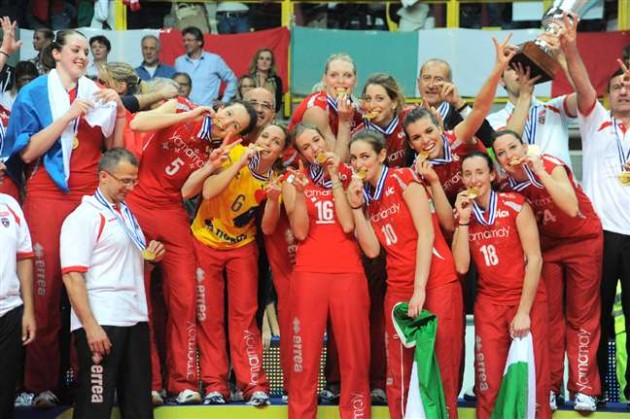 This time, nevertheless, that win had a very special flavor as the game was played in front of more than 5’000 home fans who were joined at “PalaYamamay” by 400 supporters of Galatasaray who could do nothing but accept the defeat of their heroines.

Yamamay played a superb match, with Floortje Meijners sealing the 3:1 that called for the golden set; even though their captain Helena Havelkova was not able to join this final – she accompanied her mates from the bench as she was still injured – Yamamay displayed such an intensity and quality of play that did definitely pay back the local fans who had prepared a special choreography of 400 square meters to set the tone of a splendid Volleyball night.

The match did not start that well for Yamamay that initially trailed 0:4 in the opening set but the hosts gradually found their rhythm well supported by Floortje Meijners (who scored 5 points in this section of the game) and Chiara Dall’Ora with 4 blocks.

Galatasaray attempted a comeback with Marina Miletic but Czech star Aneta Havlickova changed gear for Yamamay and finished it off with a comfortable 25-19.

Yamamay pressured a lot the defense of Galatasaray in set 2 and this evidently did not help the work of their setter Eleonora Lo Bianco; the Italian block reigned supreme while setter Carli Lloyd regularly found the right coordination with her spikers, especially Havlickova and Meijners (25-13).

The third set was extremely tight with Yamamay being forced to storm back for most of the time as the guests from Turkey were setting the tempo of the game with Miletic and Rosir Calderon (10 points all alone in this set) eventually paving the way for the provisional 2:1 (23-25).

Yamamay opened confidently in set 4 but dissipated its advantage after a negative break (0:6), before Giulia Leonardi and Francesca Marcon delighted the local supporters with classy actions in defense while Bauer, Meijners and Havlickova (MVP of the finals) wrapped it up with their spikes to go for the golden set (25-23).

Accompanied by 5’000 supporters who never stopped cheering on their heroines, the players of Yamamay dominated the scene there claiming a reassuring margin right by the start and staying concentrated up to the final 15-9 sealed by Christina Bauer to round out an unforgettable Volleyball night.

“If you win in front of such an audience like we did tonight, well it really feels special” said head coach Carlo Parisi. “I have to congratulate my players because they started very aggressively and they quickly forgot the defeat we had suffered some days ago in Turkey. This is a well deserved win which comes at the end of a very long and difficult campaign”.

“We played with glowing hearts” added team captain Francesca Marcon, “as we have been always doing throughout this memorable season. We have claimed the national cup and the CEV Cup, now we shall complete our showcase by taking also the national league” where Yamamay will be playing in a few days the second match of the semifinal series with Rebecchi PIACENZA.

“I feel disappointed because we never found our way into the game” singled out Lo Bianco, “but Yamamay fully deserved to win tonight”.