The Scottish Volleyball Federation has everything in place and is prepared to welcome the visiting teams for the finals of the 2012 CEV Junior European Championship – Small Countries Division which starts in Motherwell on Tuesday. 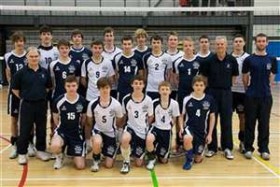 The finals will be the biggest event ever staged in Scotland, with six finalists and five full days of competition.

This will be the first time that top-level Volleyball has been played at the Ravenscraig Sports Facility which opened in 2010 on the site of one of Europe’s largest steelworks.

The starting field is particularly pleasing as the 2010 edition of the Championship had to be cancelled due to a low number of entries. Cyprus and Luxembourg have one win each in the history of the event and are expected to be amongst the favorites again this time.

However, San Marino and hosts Scotland (pictured) will aim to win a medal while the Celtic contingent of Ireland and Northern Ireland has the capability to cause some problems.

The action gets underway at 15:30 GMT (16:30 CET) on Tuesday as Cyprus plays Ireland, while Scotland opens its campaign at 20:30 GMT with a match against Northern Ireland.

SER: Semifinals of playoff for men; Decisive match for finals