Zdar nad Sazavou, Czech Republic, April 13, 2012. France, Spain and the hosts from the Czech Republic scored their second win in as many matches and are hence in full contention for the sole ticket at stake in Zdar nad Sazavou to make it to the final round of the 2012 CEV Junior Volleyball European Championship – Men slated for late August in Poland and Denmark. 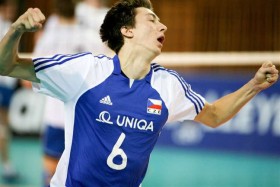 After losing to France on Wednesday, Slovenia had another unlucky tie-break, this time while playing the silver medalists from the 2011 FIVB Youth World Championship, i.e. Spain.

After opening the tournament with a pretty shaky performance against Slovenia, pre-favorite France downed Romania in straight sets on Thursday (25-19, 25-18, and 25-20). This is Romania’s second 0:3 defeat in Zdar nad Sazavou after this group had suffered a similar loss to the hosts of the Czech Republic on Wednesday.

France started off strongly (14:10) and even though Romania tried to fight back, still could not achieve this goal being sidelined by real inconsistency in defense (25-19).

In the second set France stamped a terrific 12:4 to set the tone of the game there mainly via their diagonal player Julien Winkelmuller who scored 6 points all alone to pave the way for the provisional 2:0.

Romania fought bravely in set 3 but France showed its class and character in the last section to finish it off in straight sets (25-20).

“Today our reception was definitely better than on Wednesday while playing the Czechs but we were not supported at all by our service” said Romanian captain Claudiu Dumitru.

“We played better than we did in our first match and we wanted to take at least one set but the French guys were good enough to finish it in straight sets” added head coach Valentin Grigorie.

“We won pretty easily and in straight sets, rising up the quality of our play in comparison with the first day” stressed France’s mentor Jean-Manuel Leprovost.

“On Friday we expect a tough game with Spain but our goal remains to win all matches even if we play with the strongest sides out there”.

Team captain Adam Zajicek delivered a very good performance at the net touching many balls in blocking while setter Pavel Bartos was well supported by Petr Sulista in attack for a speedy 25-18 to open the operations. The Czechs trailed 0:3 in the second set but they were able to draw level at 7 all while Estonia was being anchored by the spikes of Karlis Mesila. An excellent serving turn of Vojtech Patocka contributed a margin of 5 for the Czechs by the second technical time-out, thus paving the way for the final 25-16. The Czechs slowed their pace down in set 3 with Estonia going up there 16:11 and even though the home guys clawed back to level at 23 all, still the guests could score the next two rallies to seal the final 25-23 and call for the fourth set. Estonia did not stretch that pace to set 4 where they committed quite many errors and the Czechs could move up 9:4 to finish it off with a massive 25-13 and claim three more valuable points for the standings of the group.

The last match of the day turned into a real marathon with Spain eventually edging Slovenia at the tie-break (23-25, 25-23, 21-25, 25-19, 26-24). The guys from Slovenia played an excellent match but once again could not celebrate a happy end as they were punished in the deciding tie-break by the 2011 world silver medalists of Spain.

“We are very tired and disappointed, as we have played two tie-breaks and we eventually lost both. We hope to score our first win on Friday with the Czechs” said Slovenia’s captain Jan Brulec.