Kharkiv, Ukraine, April 13, 2012. Belgium and the hosts of Ukraine top the tables of the second-round qualifier to the 2012 CEV Junior Volleyball European Championship – Men which is currently running at “Lokomotiv” Sports Palace in Kharkiv after they scored another 3:0 win to edge the Netherlands and Israel respectively. 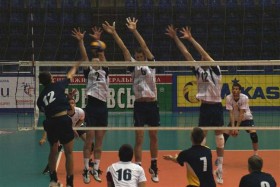 Belgium opened the program on Thursday by downing their neighbors from the Netherlands in three straight sets (25-15, 25-21, and 26-24). The guys in red jerseys quickly set the tone of the game with a speedy 25-15 to claim the opening set before the Netherlands stormed back in the early phases of set 2 going up 5:2. The second half of that set was pretty balanced but Belgium eventually scored the deciding points to go for the 2:0 (25-21).

Great Volleyball was to be seen on court in the third set where Belgium and the Netherlands played with glowing hearts; the “Oranjes” did their best to prolong the game but their opponents were once again able to show strong nerves to wrap it up with the score of 26-24.

Hungary claimed the second match on schedule for Thursday by edging Croatia 3:2 after more than two hours of play. Hungary opened by claiming the first set 25-21 before Croatia fought back to call for the provisional 1:1 after dominating the scene in set 2 (25-16). The guys from Croatia played with good momentum also in the third set (25-22) while set 4 did turn into a very close battle where Hungary eventually came out on top of a neck-to-neck race (25-23). That trend continued also in the deciding tie-break where Hungary eventually sealed this long affair by the score of 16-14 to claim its first win of the tournament.

The hosts of Ukraine celebrated their second positive result of their home campaign by downing Israel in straight sets (27-25, 25-22, and 25-21). Ukraine initially trailed 2:5 in the opening set and after continuous turnarounds the home heroes could eventually decide it in their favor by finishing it off at 27-25. A similar scenario unfolded in set 2 with Ukraine having to storm back from 2:6 to ultimately assert its supremacy especially in blocking for the final 25-22. Set 3 was initially marked by many mistakes on both sides of the net before Ukraine went up 15:9; the hosts relaxed a bit too early thus helping Israel come back to -2 (15:13) before the home side, anchored by Oleksandr Tomilin who had joined the game at the end of the first set, could wrap it up in straight sets (25-21).