CEV: Russia back on track for Olympic ticket after a 3-1 win over Serbia

Russia is now back on track for a spot in the semifinals of the 2012 Olympic Games - European Qualification for women. In today’s derby between reigning World champions and incumbent European champions the team mentored by Sergey Ovchinnikov defeated Serbia 3:1 (29-27, 22-25, 25-16, 25-19) to achieve its first victory in Ankara. 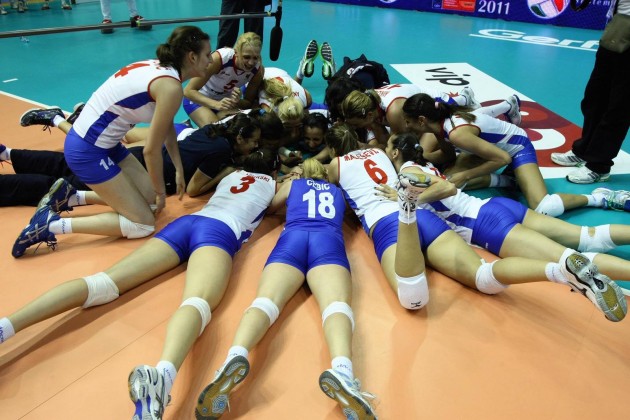 Russia started out stronger in the first set and with some prolific scoring from star players Ekaterina Gamova and Liubov Shashkova (better known as Sokolova) kept a lead in the score.

With Serbia trailing close behind, the gap never exceeded 3 points. The Southern Europeans were able to catch up at 7-7, 15-15 and then at 21-21 and even to come out on top after the next rally. They managed to maintain this minimal lead and got to their first set-point at 24-23.

Russia survived three more of those to finally get back on top with three consecutive points for 29-27. The second set was even more interesting as both teams stepped up their blocking efforts. This greatly affected Russia’s attacking efficiency and between the two technical time-outs Serbia was able to take control.

Jovana Brakocevic demonstrated her offensive power to help her team stay in the lead, but eventually it was her block that put the ball down for the final point of the set. Russia was in charge of the third set as Sergey Ovchinnikov’s players took advantage of the many errors that their opponents inexplicably started to make.

The advantage of the Russian team started piling up to reach an impressive 25-16 at the end of this part. Zoran Terzic’s team almost eliminated its mistakes in the fourth set and the equilibrium was maintained through 16-16.  The key to the outcome of this part was a crucial series of 5 consecutive points that Russia achieved with Gamova behind the serving line that prompted a 21-16 on the scoreboard.

After this for the world champions it was not a problem to bring the set to a successful end with a block-out from Sokolova registering the last point for a final score of 25-19. Gamova became the top scorer of the match with 25 points for Russia, followed by teammate Tatiana Kosheleva with 20.

Milena Rasic with 19 points and Jovana Vesovic with 18 were most prolific for Serbia. “We played well in some parts of the game, but not so well in others.  We will do our best to use our second chance in Japan,” captain of Serbia Maja Ognjenovic said after the match.

Her coach Zoran Terzic added: “Today I am more satisfied since we played better than yesterday, but not enough to win. I wish Russia to qualify for the Olympics Games from Ankara as I would not prefer to see them in Japan“.

Captain of Russia Maria Borisenko was happy with the win: “It was our last chance to stay in contention and we won. We are happy we still have our chances to go to the Olympics.  This was not an easy match for us.”

Head coach Sergey Ovchinnikov agreed and added that Serbia is a very strong team. “We took advantage of this last chance for us and won,” he concluded.