Bulgaria made a successful start of its home-ground campaign at the 2012 Olympic Games - European Qualification for men in Sofia. Inspired by their enthusiastic fans on the stands of Arena Armeec hall, they shut out Slovenia 3:0 (25-23, 25-18, 25-22), but had to cope with the courageous performance of their opponents. 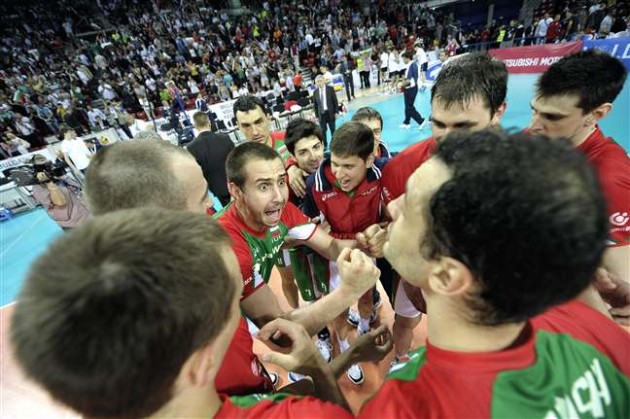 Slovenia made the first set really difficult for the home team.

The team mentored by Veselin Vukovic was very ambitious to start well in the competition and managed to control the scoreboard through the second technical timeout.

Immediately after that Bulgaria achieved 4 consecutive points to take the lead at 18-16.  Slovenia recovered to once again get on top at 22-21.

Some great defense by Viktor Yosifov was followed by a blasting hit by Bulgaria’s other middle blocker Nikolay Nikolov and the final score was set at 25-23 in the home team’s favor.

The second set was a different story. While Bulgaria reduced the number of unforced errors, Slovenia started making way too many of those.

The Lions took advantage of that as their setter Georgi Bratoev’s fantastic performance on the court was cheered on by the fans. Bulgaria piled up an impressive lead to close the set at 25-18. Shortly before the end of this part Nikolay Nikolov sustained a minor injury and sat out the rest of the match.

Mitja Gasparini displayed some great spiking power as Slovenia took charge of the third set and quickly built up a 5-point lead.

After 11-6, however, four consecutive points for Radostin Stoytchev’s team narrowed the gap to a minimum. As the Bulgarians stepped up the power of their serves, Slovenia continued to make a lot of mistakes. At 17-16 the home team was already in the lead as it gradually accumulated a 23-19 advantage.

Courageous defensive efforts kept Slovenia alive for a while longer, but eventually an attacking error put an end to the match at 25-22 Bulgaria’s way to the great satisfaction of the home crowd. Bulgarian star Matey Kaziyski was the best scorer of the match with 15 points while Tine Urnaut and Mitja Gasparini scored 13 and 12 respectively for Slovenia.

“We knew that we were facing a very good team, one of the favorites in the tournament. We started the game well, but we were too nervous and made too many mistakes. We missed a good opportunity to close the first set and did not let ourselves back into the game,” Slovenian captain Tine Urnaut said.

“We followed our technical plan, but we made a lot of mistakes attacking and serving,” Slovenia’s head coach Veselin Vukovic agreed.  ”I would like to remind you that we landed in Sofia without many of our key players and our problems in the middle blocker’s position were obvious tonight. Bulgaria deserved the win.”

“It was very important to start this tournament with a win and to get rid of the nervousness and the pressure on the team,” Vladimir Nikolov, captain of Bulgaria, stated. “Another problem came from the last minute injury of our setter Andrey Zhekov. Fortunately, we showed character and fought for every ball from the beginning until the very end.”

Bulgaria’s mentor Radostin Stoytchev commented: “It was a very complicated game for Bulgaria in terms of the pressure and the unexpected injuries of some of our main players. The most decisive moment came after the second technical time-out of the first set, when we fought to take the lead and never looked back.”