Scates, who also taught at the university for many years, said the plan never was to coach the UCLA men for 50 years. 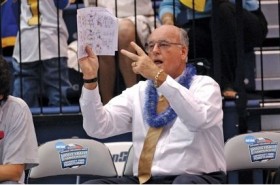 “I didn’t really have a plan on how long I wanted to coach,” he said. “I taught until it wasn’t fun anymore and after 35 years that came abruptly. I didn’t enjoy it and I made the decision to retire. The problem here is I still enjoy coaching. But it seems like it’s time. Fifty years is a long time. It’s a good time to go out with this group that has seven seniors that have been here four or five years. I don’t think I have any regrets.”

Scates is looking forward to spending his upcoming free time with his wife Sue, children Tracy, Leslie, and David, and his grandchildren.

“I plan on traveling with my wife,” Scates said. “I’ll travel where she wants to travel to. I did a lot of my traveling when my wife was raising three children. It’s time to go to the places she wants to go. I anticipate I will miss the program and miss coaching, but the good thing is I’ll get to spend more time with my wife, children, and grandchildren. That’s makes it all worthwhile.”

Amberg said Scates’ devotion to his family is one of his greatest attributes.

“I see that commitment to family,” he said. “He talks about his wife and his family a lot. Hopefully one day I will be as good a husband and father as he is.”

Scates notes that he doesn’t plan on leaving the sport completely. He may look into coaching with USA Volleyball and even mentioned having an interest in doing some color commentating on television.

“I wouldn’t have terrible withdrawal that way,” he laughed.

While he will be missed on the sideline, his contributions and influence on the sport will continue to live on.

“Al has been referred to as volleyball’s Wizard of Westwood,” said Ron Shayka, senior associate athletic director at George Mason University and the former chair of the NCAA Men’s Volleyball Committee (he rejoins the committee this fall). “It’s an appropriate comparison with his unprecedented number of wins and national championships at UCLA.”

“The men’s game has been significantly impacted by Al’s contributions over the years. When you take into account our national team’s success over the years, I think it’s safe to say Al has positively impacted the game of volleyball around the world. Al’s an original. It’s hard to imagine a coach ever maintaining the combination of competitiveness, passion, and success that Al has done at one school for 50 years.”

Smith concluded: “Al has set the standard for all coaches in any sport.”