Sopot, Poland, December 13, 2011. Atom Trefl SOPOT of Poland, one of the rookies participating in this year’s CEV Volleyball Champions League – Women, delighted many home fans tonight at “Ergo Arena” by routing VK Modranska PROSTEJOV in straight sets (25-21, 25-14, 25-20) dominating the scene especially with their blocks (14 vs. only one for the Czechs). 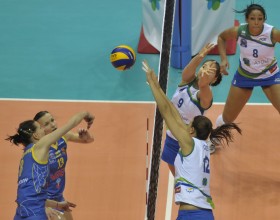 SOPOT started very well (8:3) but PROSTEJOV leveled at 10 before the hosts displayed their amazing blocks to wrap it up pretty quickly (25-21).

The score stayed pretty close in set 2 but SOPOT gradually took control of the operations especially by claiming a margin of 6 via two aces of Eleonora Dziekiewicz (14:8).

The remainder of the set was a pure formality with SOPOT playing some great Volleyball to claim a comfortable 25-14.

PROSTEJOV stormed out to a provisional 1:5 in set 3 and home coach Alessandro Chiappini rapidly asked for a time-out.

His girls quickly drew level at 8 and then controlled the match as they had done in the previous sets to complete their mission with a perfect 3:0 (25-20).

“We applied the tactics worked out by our coach and it went perfectly. We knew we were going to block them by putting some pressure with our services” says captain Izabela Belcik.

“In such a competition like the Champions League you cannot afford that your rivals score 3 points in a row. You do not have any chance to catch up anymore and tonight this happened to us” adds the captain of Modranska Solange Pereira Soares.

The return match is scheduled for next week in the Czech Republic.