Dresden, Germany, December 13, 2011. The first goal of the season for DRESDNER SC was not fulfilled last night. The team of head coach Alexander Waibl lost unexpectedly in Wiesbaden and could not qualify for the semifinals of the national cup for the first time in four years. 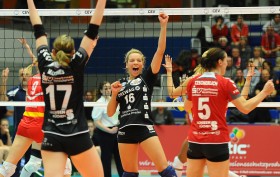 In 2007 the team was stopped in the 4th finals by VILSBIBURG. Even if head coach Alexander Waibl explained the Champions League remains the absolute priority for his team, the early stop in the national cup is a major disappointment for the runner-ups from last year.

The girls of DRESDNER SC kept the first set open for a long period but the hosts from VC WIESBADEN played more concentrated at the end.

A great series of services by DRESDNER setter Mareen Apitz put the team fast into a 16:5 lead in the second set thereby paving the way for the 1:1.

The third set was close as the run in the first set until 11:11.

Then the girls from VC WIESBADEN put DRESDNER SC under pressure.

Even if the team of head coach Alexander Waibl could draw at 21:21 the hosts scored the big points at the end and went up 2:1 in sets.

The loss of set three put the pressure all on the side of DRESDNER SC. Though DRESDNER SC started great into set four with a lead of 4:0, VC WIESBADEN kept the pressure high and showed a great performance.

The team around captain Stefanie Karg was fighting hard but VC WIESBADEN was the lucky winner of the night.

After 109 minutes DRESDNER SC couldn’t realize their ambitious goal to qualify for the final act of the national cup.

But there won’t be much time to take a break, because the upcoming home match in the 2012 CEV Volleyball Champions League remains the absolute priority for the team.

DRESDNER SC will fight for their first victory in Europe’s finest competition against the French team of ASPTT MULHOUSE.

The main sponsor of the team Ostsächsische Sparkasse Dresden and the club organized a special surprise for their fans. All spectators who are member of that local bank will benefit from a special ticket discount.

“We want to have as many spectators as possible in the hall. We know that we have to create a special atmosphere to win our first match in the Champions League against ASPTT MULHOUSE” explains local Organizing Director Sandra Zimmermann.