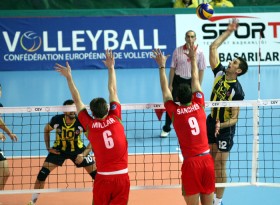 Fenerbahce initially tried to find a way through the tall Russian block but NOVOSIBIRSK was already setting the pace by the second mandatory stop of the opening set (12:16).

Local head coach Daniel Castellani asked for a time-out at 15:20 but Cuban opposite Michael Sanchez finished it off for Lokomotiv with the score of 20-25.

The hosts quickly trailed 6:10 in set 2 as a result of their shaky defense and even though some 1’100 fans were supporting Fenerbahce tonight at “Burhan Felek” Volleyball Hall, still Lokomotiv stayed focused and could seal the provisional 0:2 (21-25) via their massive blocks.

ISTANBUL caught a good start in set 3 (8:6) and stretched it via the serving turn of Ivan Miljkovic (12:8).

The Turks called for the second technical time-out leading there 16:14 but Lokomotiv fought back bravely, drawing level at 21 and eventually finishing the match in straight sets, with Michael Sanchez pacing his side with 22 points.

“We did not attack and block with the necessary consistency” comments Fenerbahce head coach Daniel Castellani.

“We tried to play tactically against a very strong and tall opponent but it did not work”.

“We played at our 20% today since some players were tired or sick. We will do our best to claim the return match in Russia” says captain Arslan Eksi.

“Many things have changed in Turkey’s Volleyball since I played in Istanbul for the last time. My team delivered a perfect performance tonight so we won without conceding a set” says Russian mentor Andrey Voronkov.

“Every match is tough in the Russian league, so we are always ready to play strong opponents. We played solid and deservedly won tonight” says US American star Ryan Millar.