The provisional leader of Pool F, PGE Skra BELCHATOW, will play ACH Volley LJUBLJANA of Slovenia for the third round of action in the prelims of the 2012 CEV Volleyball Champions League – Men at Sports Palace in Lodz. 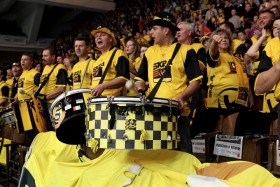 These teams are crossing their ways for the second time as they already played the classification match 3/4 for the 2010 final four that took place in Poland’s second largest city with the home guys eventually claiming bronze.

“This match is really important as another win would put our team in a good position to advance to the Playoffs 12” says home coach Jacek Nawrocki. “If we win, the situation will be quite clear for us and we want to make sure we qualify for the Playoffs 12 as soon as possible as my players are really tired after coming back from the World Cup held in Japan”.

These players are Marcin Mozdzonek, Bartosz Kurek and Michal Winiarski; the first two will start the game from the bench as they are slightly injured. Libero Pawel Zatorski was also part of the team that claimed silver some 10 days ago in Tokyo but he did not play much there. All tickets are sold out for this game with some 8’000 fans expected in attendance; ACH Volley travels to Poland after beating Budvanska Rivijera BUDVA and losing to TOURS VB in straight sets and the much wanted guy in Lodz is their libero Daniel Lewis, who won two editions of the national league and one national cup with PGE Skra.

Head coach Nawrocki expects ACH Volley will deliver a stronger performance than in the previous rounds. “We are a strong side but I think we will have a very tough game against such a good opponent and in front of an incredible audience. We will miss our middle blocker Matevz Kamnik who is injured but we want to challenge the hosts” says ACH Volley head coach Igor Kolakovic who also got back from Japan after a disappointing campaign with the Serbian national team.

CEV CL: CUNEO scores away win to re-assert its leadership