CEV CL: CUNEO scores away win to re-assert its leadership 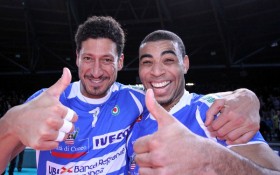 The opening of the match was very balanced but CUNEO gradually opened the gap via the help of Leandro Vissotto and Earvin Ngapeth (6:10). POITIERS was sidelined by many mistakes and even though the hosts clawed back from 14:19 to 19:20, still CUNEO easily controlled the final rush of the set.

CUNEO stepped up once more to open set 2 with a good tempo (3:8) and even though the home guys fought bravely, they still could not stop the Italian armada. Vissotto and Ngapeth dominated the scene and CUNEO eventually pocketed that section of the game via an ace of captain Wout Wijsmans.

Stade Poitevin managed to stay tuned a bit more in set 3 (6:7) but Wijsmans and once again Ngapeth opened the gap for the guests (9:13). The Italians eventually cruised past in straight sets with Wijsmans being named MVP of the game.