Top Posts
POL M: ZAKSA again in pursuit of PlusLiga...
Russian federation denies joining Asian Confederation and announces...
TUR W: Bošković to leave Eczacıbaşı at end...
CWCH M: Italian sides Perugia and Trentino reach...
GER M: In a big clash between the...
CL W: No one has ever made such...
POL M: Jastrzębski remain without starting middle blocker...
CWCH M: Minas suffer from Paykan, led on...
GER M: BR Volleys continues winning streak and...
BRA W: Minas come back after 0-2 against...
Home » CEV M: Italy moves on to the final in Sofia after a 3-1 against Serbia
NULL

CEV M: Italy moves on to the final in Sofia after a 3-1 against Serbia

Italy became the first team to make it to tomorrow’s final of the 2012 Olympic Games - European Qualification for men in Bulgaria. The team of head coach Mauro Berruto knocked Serbia out of the tournament with a final score 3:1 (25-14, 25-19, 19-25, 25-16) in the first semifinal, played in front of thousands of spectators in Arena Armeec hall, among which CEV President André Meyer, the President of the Serbian Volleyball Federation and CEV Senior Vice President Aleksandar Boričić and the President of the German Volleyball Federation Werner von Moltke. 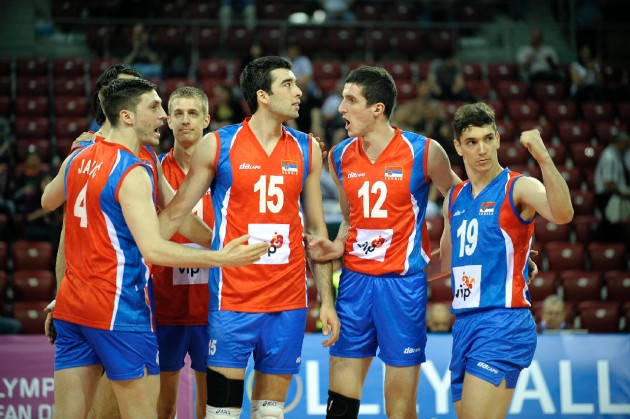 Italy completely prevailed in the first set.  With powerful serving and insurmountable blocking, the team of Mauro Berruto was playing cat-and-mouse with the Serbs and eventually won the set with a huge point differential – 25-14.

As if demotivated by the absence of a strong opponent on the other side of the net, the Italians made many unforced errors in the second set. However, they were able to put more focus on their attacks, especially through Michal Lasko, and once again dominated on the court to close the set at 25-19.

Italy maintained a small lead through the second technical time-out of the third set and seemed to be approaching a straight-set victory, when suddenly the Serbs woke up, realizing they had nothing more to lose. Some fantastic serving by Aleksandar Atanasijevic and a great job done by the Serbian block helped the team take over the rest of the set and finish at a 6-point margin.

The perfect ending of set 3, however, was not enough for Igor Kolakovic’s players to regain their confidence and in set 4 they were once again not able to stay in contention. The more experienced Italians took advantage of the many mistakes in Serbia’s performance and had no problems building up a 9-point gap for the final 25-16 in the set.

Ivan Zaytsev was the game’s best scorer with 22 points, with Michal Lasko adding another 19 on Italy’s account. Aleksandar Atanasijevic was the most prolific player of the Serbian team with 15 points.