CEV CL: Second victory in Pool A for Noliko MAASEIK against CSKA SOFIA 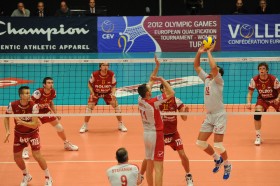 Second victory in Pool A for Noliko MAASEIK against CSKA SOFIA

The second set unfolded with a different plot as Noliko paced the game all the way through (8:5, 12:7, 16:8) with a good contribution of Nathan Wounembaina and Pieter Verhees.
CSKA spiker Vladislav Aleksandrov got injured during the second set and he was replaced by Velizar Kyosev, but Noliko sailed comfortably to the final 25-16.

The third set was pretty close but Noliko got control of the operations after a tie at 12; Kevin Klinkenberg took his side by the hand and paved the way for the provisional 2:1 lead (25-22).

CSKA SOFIA was not willing to surrender that easily and opened set 4 with a margin of 5 (4:9); Noliko, supported by the home crowd, got back on track at 15 all and changed gear to finish it off in four sets.

Jason Haldane, recently transferred to Sofia, was disappointed: “We played a good first set and we had our chances also in set 3 and 4 but we made too many mistakes”.

Local hero Pieter Verhees was pretty happy: “We started playing well from the second set as we realized such routined guys can be beaten only if they lose composure. They know very well how to play but we did our job properly tonight”.