Schwerin, Germany, December 15, 2011. After their original flight was canceled, the players of SCHWERINER SC started their trip to make it to Cannes for the third round of action in the prelims of the 2012 CEV Volleyball Champions League – Women on Wednesday morning at 3 am. Every single step was and is being followed by the cameras of local TV station NDR. 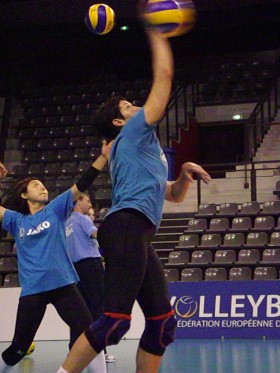 After finally making it to the French Riviera, the German crew profited of the unique chance to enjoy some sun and have a walk along the beach.

Assistant coaches Andreas Renneberg and Michael Döring, physiotherapist Jens Ziegler and Mr. Dieter Maukel, member of the Management Board, even went for a swim in the mid of December.

However, SCHWERINER SC did not travel to the Côte d’Azur for holidays as tonight there will be a tough match at “Palais des Victoires” against the local heroines of RC CANNES.

After training for more than one hour there, the team around head coach Teun Buijs went for a short sightseeing tour of Cannes, being always accompanied by NDR, the media partner of SCHWERINER SC.

A TV program will be aired – by using that footage – to promote the match vs. RC CANNES that will be held next week at “Sport- und Kongresshalle” in Schwerin.

Before playing host to RC CANNES, the German club – which is back in Europe’s most elitist competition after a very long break – will play Smart Allianz STUTTGART for the Bundesliga and then continue with VC WIESBADEN only a couple of days before Christmas.

After a very short pause, SCHWERINER SC will then re-play VC WIESBADEN on December 30 for the semis of the national cup.

Russia: After great away win Lokomotiv hopes to down Fenerbahce also at home