CEV CL: After great away win Lokomotiv hopes to down Fenerbahce also at home

Novosibirsk, Russia, December 15, 2011. Lokomotiv NOVOSIBIRSK recently scored a splendid victory in straight sets to edge Fenerbahce Grundig ISTANBUL for the third round of play in the prelims of the 2012 CEV Volleyball Champions League – Men (Pool E). 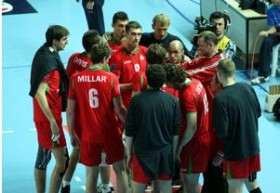 The Russian “express” intends to stretch that excellent momentum also to the return match which is scheduled for next week in Siberia’s largest city.

Two players of Lokomotiv, setter Alexander Butko and wing spiker Denis Biryukov, recently got back from Japan after topping the standing of the FIVB World Cup thereby claiming a ticket for the 2012 Olympics in London.

US American Ryan Millar was also in Japan but his team finished only sixth hence failing to make it to the Olympics. In domestic competitions the trend is not that positive for Lokomotiv, after losing a home match in straight sets to the neighbors of Kuzbass KEMEROVO, the team dropped down to the sixth place in the rankings of the Eastern Conference.

However, the speedy win over Fenerbahce brought back some confidence and positive energy as confirmed by head coach Andrey Voronkov: “My team delivered a perfect performance there and we took the game without losing a set”.