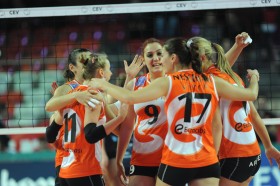 Eczacibasi caught a good start with the serving turn of Busra Cansu (4:1) but VILLA CORTESE fought back for the 4 all; the home girls set the pace by the first mandatory stop (8:5) and continued with a good tempo as VILLA CORTESE did not find a way to stop the attacks of Mirka Francia and Neslihan Darnel. Abbondanza called for two time-outs and as his side was trailing 20:9, he changed his diagonal line with Pincerato and Barborkova for Pavan and Berg. It did not help, as Eczacibasi cruised quickly to the final 25-14.

The scenario did not change in the opening of set 2 with the home side going up 4:1 and 8:2 with three aces of Darnel. VILLA CORTESE was still having problems in reception and as the score stood at 18:9 for Eczacibasi, Abbondanza changed again his setter. Once again this move did not change much as the home side sealed the final 25-13.

Finally VILLA CORTESE displayed its real potential in set 3 with Eczacibasi coach Lorenzo Micelli asking for his first time-out as his side was 3:6 down. With the Italians being up by 4 (11:15), Micelli changed his diagonal line, with Senna Usic Jogunica and Asuman Karakoyun replacing Neslihan Darnel and Elif Öner. Darnel was back on court only a few rallies later and she helped cut the gap to -2 (18:20) before the guests wrapped it up at 22-25.

The score stayed initially close in set 4 (6:6) and the home coach used both his technical time-outs as the Italians were pacing the game (8:9, 9:12). Karakoyun replaced Öner and finally Eczacibasi got back on track (18:17) to finish it off at 25-20 with a splendid spike of Neslihan Darnel, who eventually top scored for her side with 23 points, well supported by Mirka Francia with 16.

“We displayed our full potential in the first two sets” says Micelli. “However, we lost focus in the third set and this immediately helped our opponents. The fourth set was very tough but we played good and finally closed it with a 3:1. Now we have to prepare for our next match with RC CANNES coming up in January”.

Belgium: Young players under the spotlight in Maaseik