Sinan Cem Tanik, the Turkish representative at Greece shows a superb game in the first match of Champions League. Prouded as the best digger. 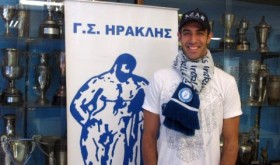 Turkish player moved to Iraklis Thessaloniki of Greece from Galatasaray this season, met Noliko Maaseik of Belgium in Ghampions League Men in the first match.

Greek team won the tremendous struggle 3-2 while Sinan draws applause by the spectators.

Besides choosen No.5 in the servers, Sinan was also the best digger for the match.

Successful player played with %61 followed by Derkoningen with %56 in Noliko Maaseik.

Switzerland: Support for the candidacy of Dr. Ari Graca

Switzerland: Berruto eager to bounce back from...